Below is a recent sample of our End-of-Day Charting section, highlighting many of the unique SPX component-based charts available to subscribers. By tracking every S&P component, we’re able to offer charts you won’t find anywhere else, such as the spread between components with a 2-day RSI over 98 and a 2-day RSI under 2, or a McClellan Oscillator based on SPX breadth rather than NYSE or NASDAQ breadth. Charts are updated nightly, usually by 8pm ET.

Cumulative Advancers – Decliners… This is the S&P500 version of cumulative breadth. Based only on the 500 stocks within the S&P, it’s not distorted by any non-equity issues. Top chart shows cumulative advance-decline line, bottom chart shows daily spread between advancers and decliners. 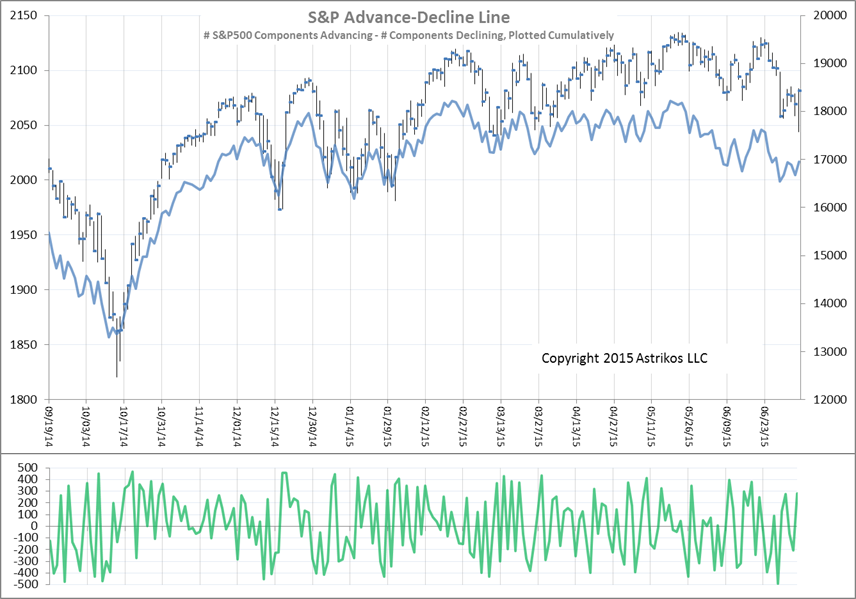 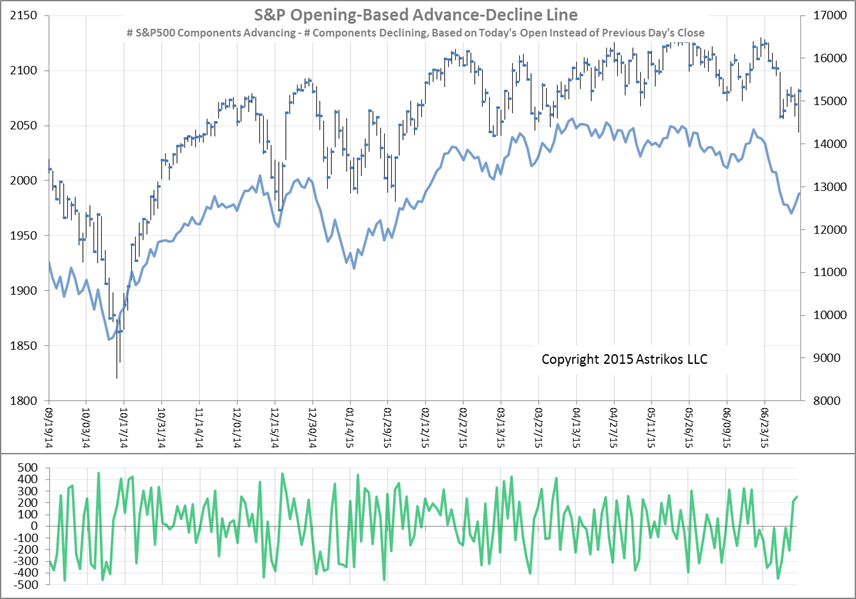 Up Volume – Down Volume… Similar to the standard advance – decline line, but in this case we’re substituting up volume among S&P500 components for advancing issues and SPX down volume for declining issues. Interesting when compared to breadth charts in terms of whether it’s confirming or not confirming with a similar move up or down. Top chart shows cumulative up – down volume, bottom chart shows daily spread between up and down volume. 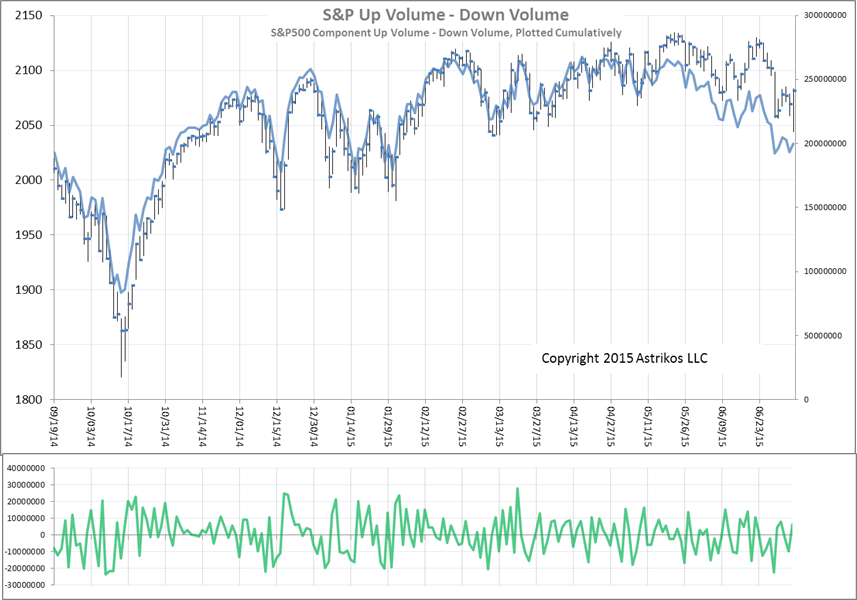 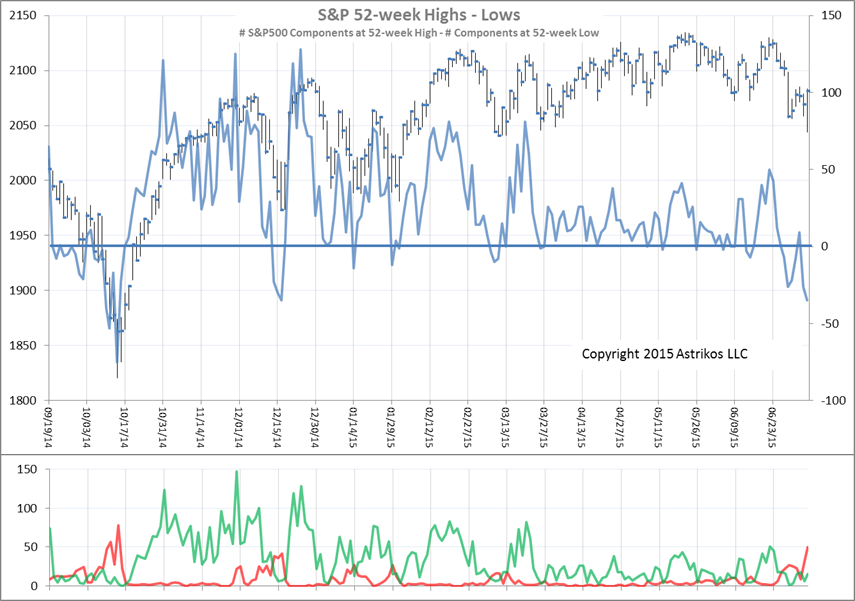 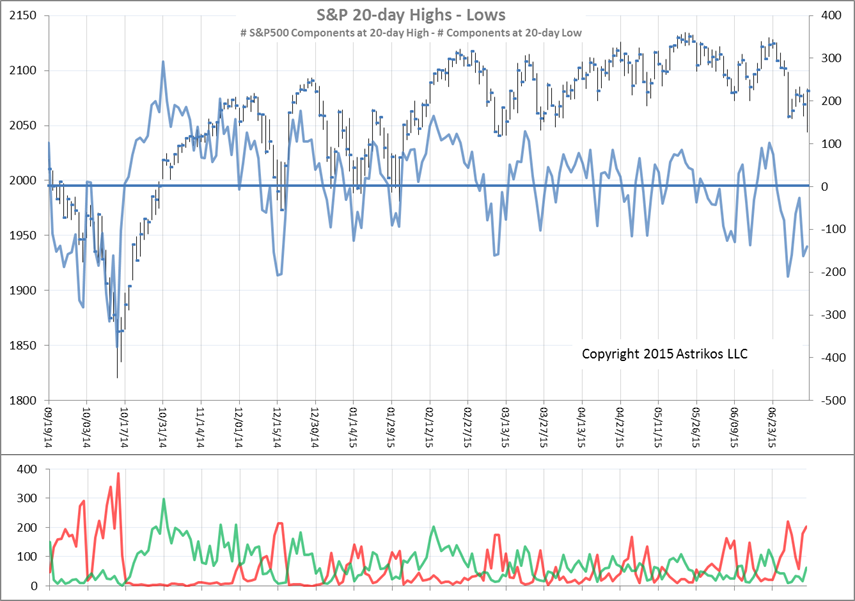 Above Average – Below Average Volume Spread… A unique volume indicator! Each day we calculate the number of S&P500 components with above-average volume and subtract the number of components with below-average volume (lower chart). We then chart this spread cumulatively (top chart) to highlight the underlying trend. Typically bullish when cumulative line is falling and bearish when rising. Total S&P500 Volume… This is the total volume of all S&P500 components, charted daily. A much more pure volume read for equities that is not distorted by non-equity issues. Also shown are 10-day and 50-day averages of volume (red and green lines respectively). 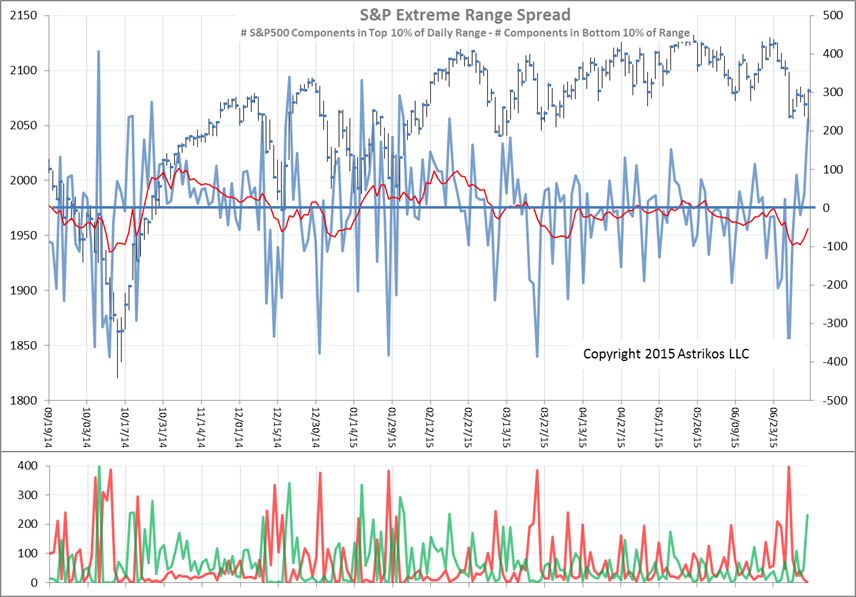 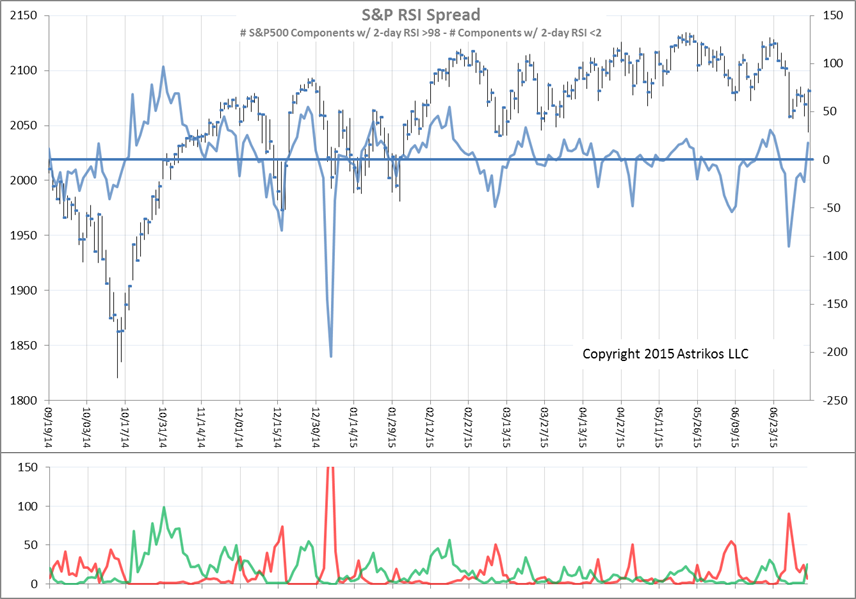 McClellan Oscillator… This is the S&P500 version of the classic Mclellan, which is the difference between a 5% and 10% exponential moving average of SPX advancers – decliners. If you like the original version utilizing NYSE breadth data, you’ll be interested in this version utilizing only SPX breadth. Readings under -50 are a good oversold indicator! 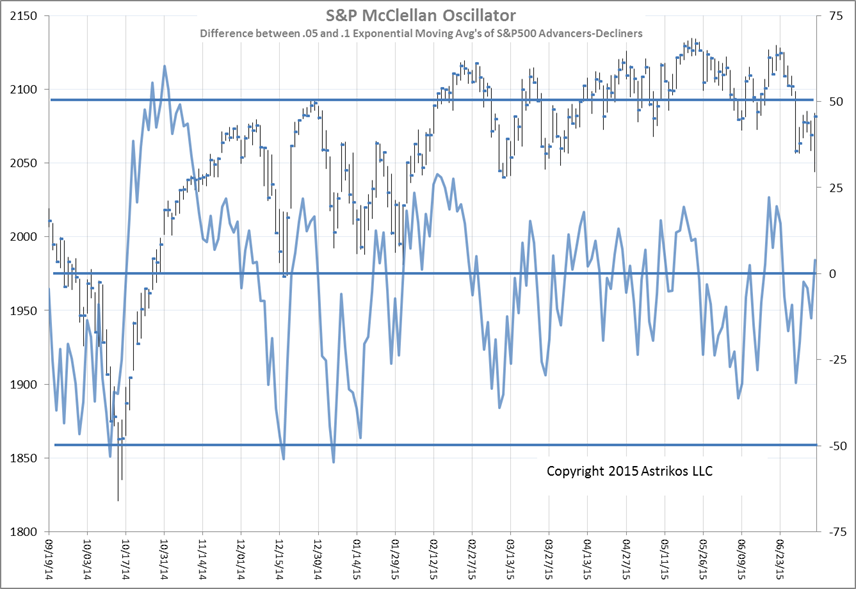 Bollinger Band Spread… We calculate the number of S&P components that closed over their upper bollinger band and the number that closed under their lower band (lower chart), then chart the spread between these two on a cumulative basis (top chart). A different take on your standard momentum indicator. 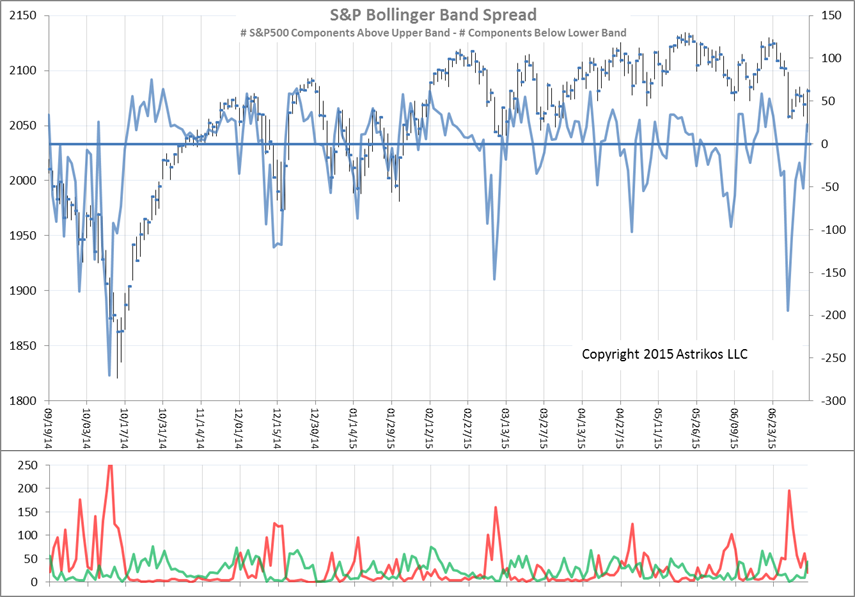 Confusion Index… Similar to the High-Low Logic indicator, we calculate the minimum of 52-week highs and lows and chart an exponential moving average of this daily reading. Readings over 1% are a red flag! Big Movers Index… SPX components that gained or lost 2%+ on the session (lower chart). We calculate the spread between 2% gainers and losers on a daily basis and chart the spread cumulatively (top chart). Watch for times when the spread diverges from price – it’s usually the spread that’s right! 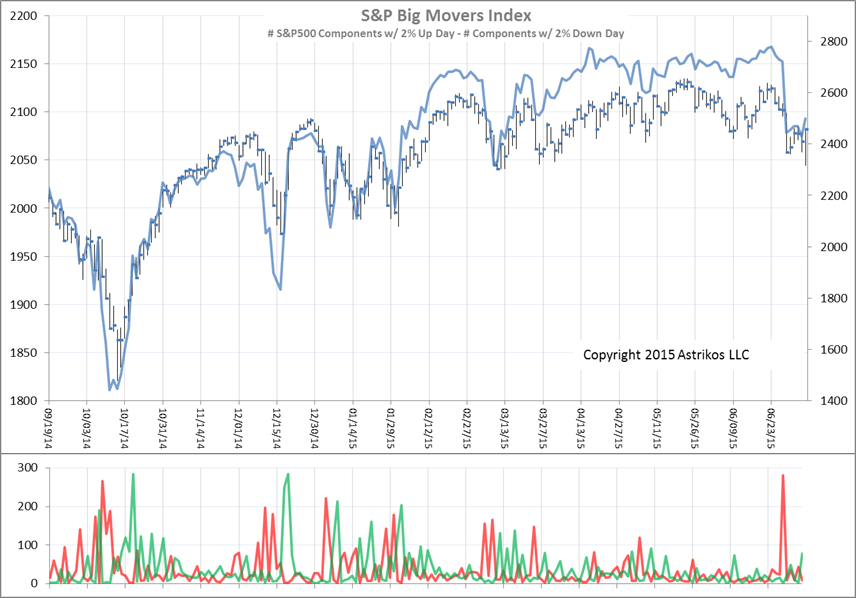 All or Nothing Days… Defined as a session in which at least 80% of the components of the S&P500 move either higher or lower. We then keep a running total of these ‘all or nothing’ days over the last fifty trading days. A high and rising line reflects a market with increasingly lopsided activity. 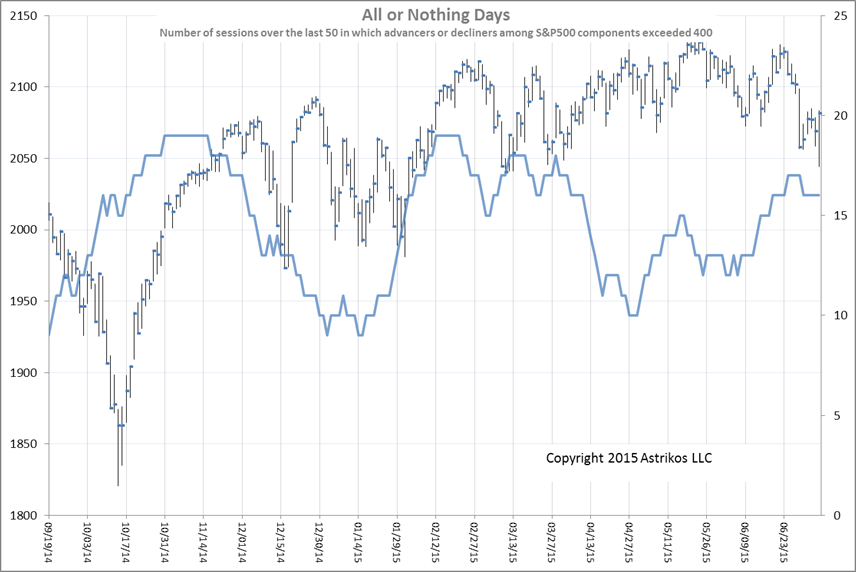 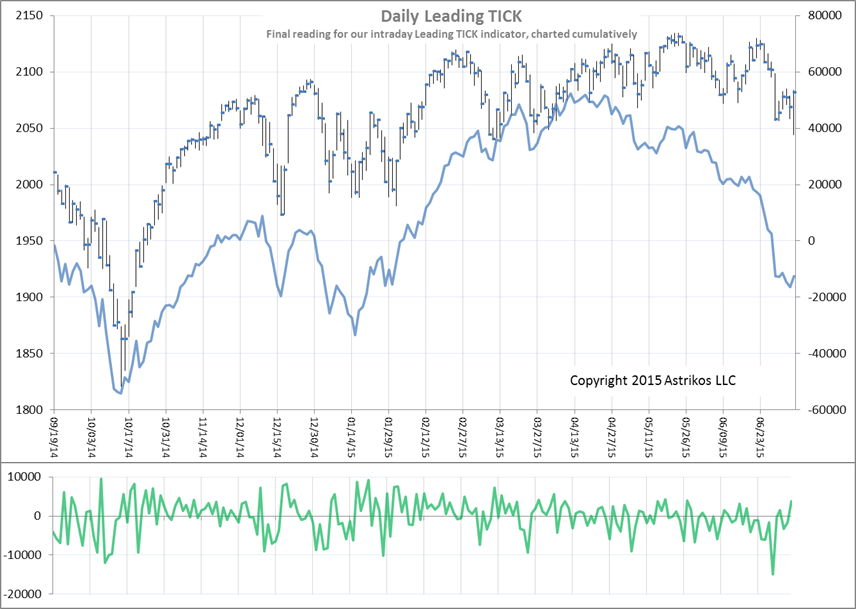 Cumulative NYSE TICK… We sum 1-minute NYSE TICK readings from open to close to create the Cumulative TICK indicator (lower chart), then chart a 20-day moving average of this number to highlight the overall trend (upper chart). Bullish/bearish for stocks when the moving average is above/below the zero line. Last Hour… This indicator is calculated by measuring the market’s performance during the last hour of each session and comparing that to the performance during the first half-hour. The daily number is then charted cumulatively. Best viewed on a longer-term time frame. Moves inversely to price, so it’s bullish when the long-term trend is lower lows and bearish when the trend shifts to higher highs. 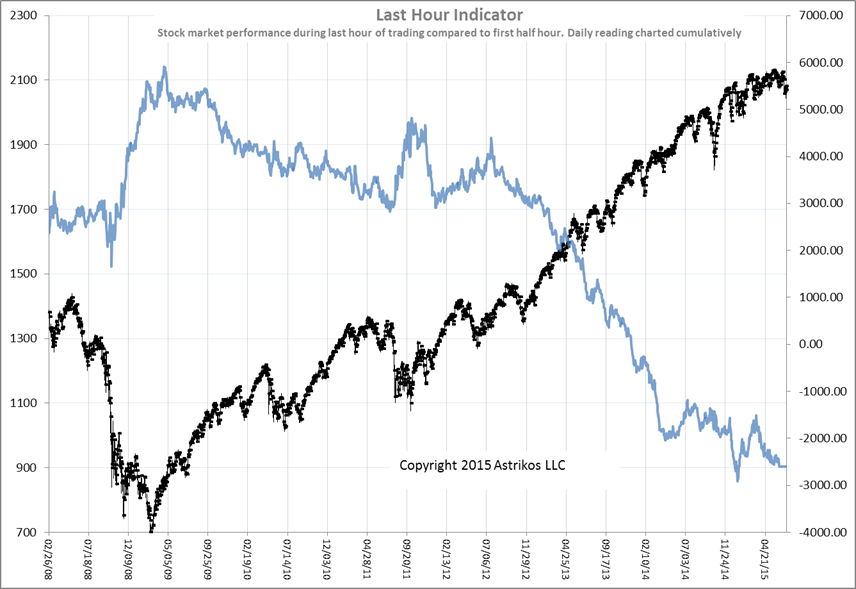 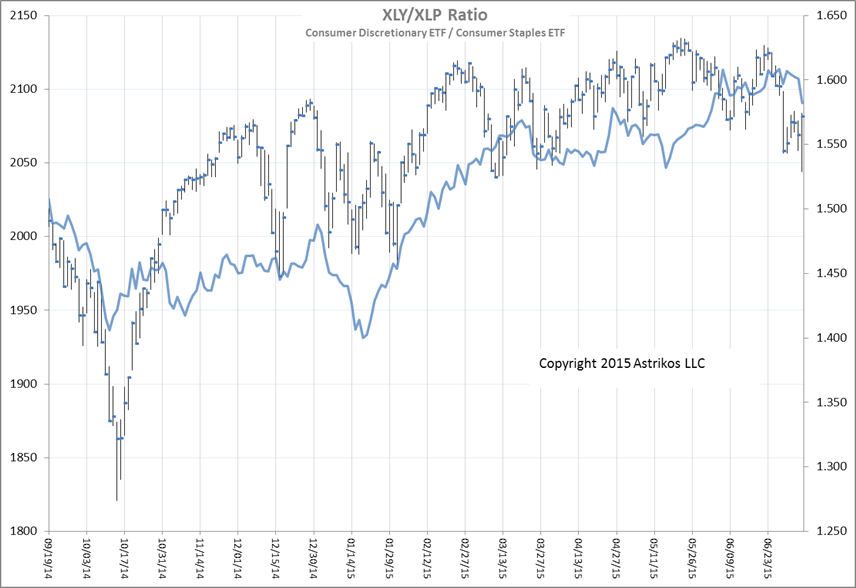 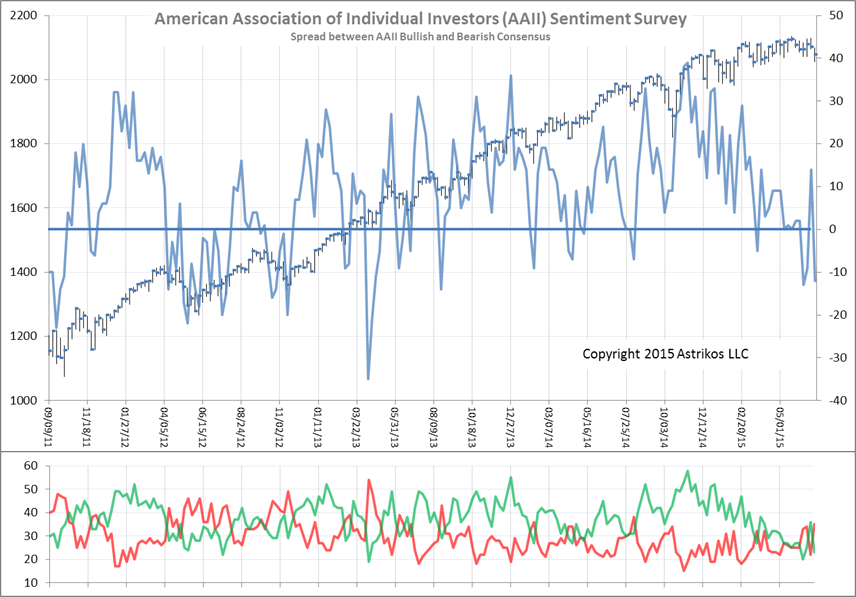 Market Vane Survey… Market Vane surveys commodity trading advisors on a weekly basis. Chart depicts the Bullish Consensus along with a 4-week moving average. CTA’s are good trend followers so it’s bullish to see this survey running north of 50% (meaning more than half of CTA’s polled are bullish). 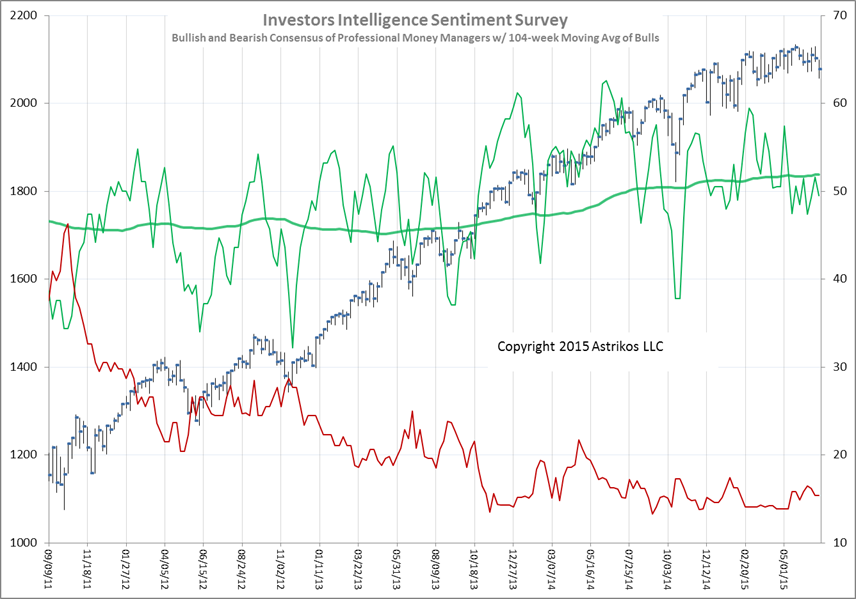 St Louis Fed Financial Stress Index… Based on a combination of interest rates, yield spreads and other indicators, the STLFSI is bullish on stocks when under the zero level and bearish when above zero.

Eurodollar Commercials Net Position… Based on Commitments of Traders data in Eurodollar futures, history demonstrates that a longer-term moving average of commercials net position has been a good indicator for the stock market. Bullish when above zero and rising, bearish when below zero and falling. 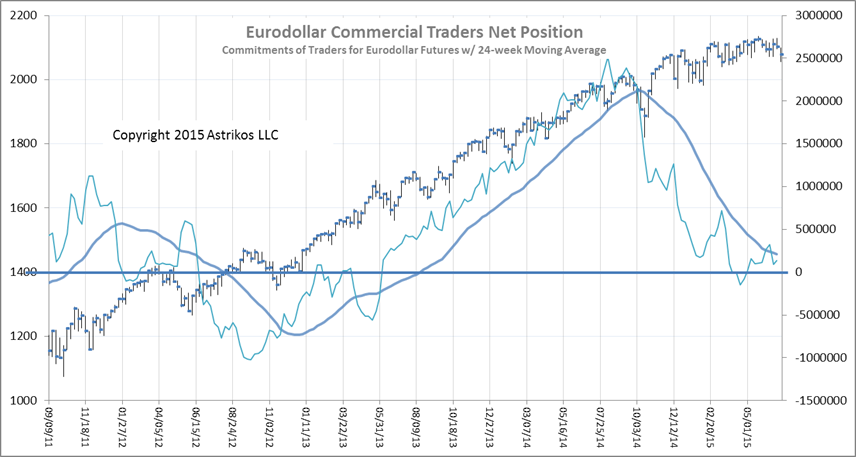 Unemployment Claims… Plotted is the 4-week moving average of initial unemployment claims as reported by the Department of Labor. Bullish when the average is trending lower (lower lows), bearish for stocks when average pushes into higher highs. 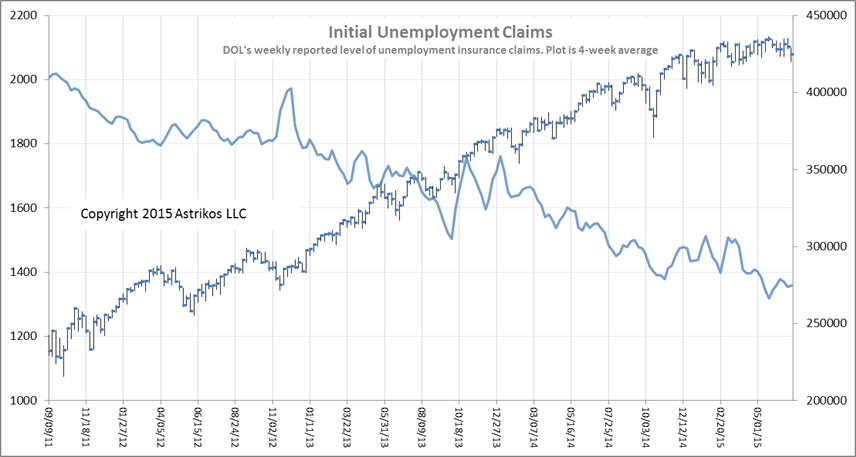